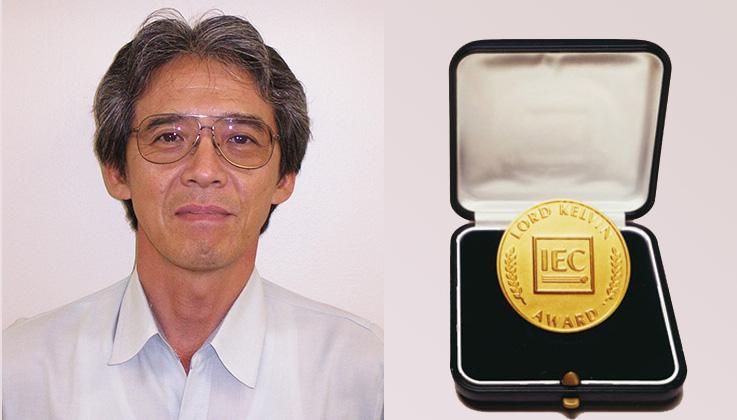 Geneva, Switzerland, 2020-11-13 – The IEC has awarded the 2020 Lord Kelvin Award to Mr. Toshiyuki Kajiya from Japan for his outstanding contribution to the development of market relevant and cost-efficient conformity assessment services. The Lord Kelvin Award is the highest honour in the global electrotechnology industry.

Mr Kajiya, who becomes the 36th laureate and the fifth from Japan, received the gold medal in a ceremony held in Japan. The IEC President, Dr Yinbiao Shu, and the IEC General Secretary, Mr Philippe Metzger, sent video messages.

“It is my pleasure and honour to bestow the 2020 Lord Kelvin Award on Mr Toshiyuki Kajiya, in recognition of his valued leadership and tireless support of the IEC,” said Dr Shu.

“I would like to thank Mr Toshiyuki Kajiya — a tireless advocate for IEC during all these years — for his dedication and professional expertise which has advanced the market-relevance and global reach of IEC work in many ways,” said Mr Metzger.

Mr Kajiya is the Director and Board Member of Japan’s Institute of Global Safety Promotion. He is the 2019 recipient of the Japanese Prime Minister Award for Industrial Standardization.

As an eminent member of both CAB and IECEE, Mr Kajiya has led activities that have achieved formal recognition of the Certification Body (CB) Test Certificate as proof of compliance by national regulators in the Gulf and Eurasian economic regions. He has conducted capacity building activities and increased effective use of IECEE in the ASEAN region through his leadership in planning and role as lecturer and trainer in the IEC Affiliate Conformity Assessment Status (ACAS) programme.

About the Lord Kelvin Award
The prestigious IEC Lord Kelvin Award takes its name from the first IEC President, who was a distinguished scientist and prolific inventor. Lord Kelvin contributed significantly to the advancement of modern physics and the practical applications of electrotechnology.

Lord Kelvin, together with Charles Le Maistre, the first IEC General Secretary, can be considered the true fathers of standardization. They put in place the processes and methodologies that enable companies to spread new technologies broadly and countries to build more sustainable infrastructure.

Today, the Lord Kelvin Award honours their vision and drive to understand and improve the practical applications of the millions of electrical and electronic devices and systems that are part of our daily lives.

About IEC
The IEC (International Electrotechnical Commission) is a global, not-for-profit membership organization that brings together 173 countries and coordinates the work of 20 000 experts globally. IEC International Standards and conformity assessment work underpins international trade in electrical and electronic goods. It facilitates electricity access, and verifies the safety, performance and interoperability of electric and electronic devices and systems, including for example consumer devices such as mobile phones or refrigerators, office and medical equipment, information technology, electricity generation, and much more.

Conformity assessment refers to any activity that determines whether a product, system, service and sometimes people fulfil the requirements and characteristics described in a standard or specification. Such requirements can include performance, safety, efficiency, effectiveness, reliability, durability, or environmental impacts such as pollution or noise. Verification is generally done through testing and/or inspection.